Well this trip started with a few hiccups, a week of fog didn’t help with this problem. We finally got to the airport and man I have never seen queues like that. We queued for 2 hours before getting called for our flight. Thank god we actually got to Iceland I was almost thinking I would have had to stay n London for Christmas. Well the forecast for snow ominous and unfortunately due to overcast weather the Northern lights (Aurora Borealis) tour was not running so we didn’t get to do that one. 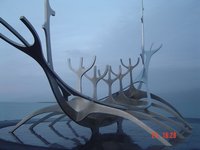 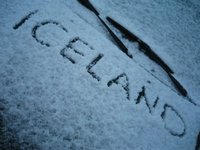 We arrived on the friday afternoon and as we told Iceland was an expensive place to visit decided to wander around the town and check out some of the prices, we found the prices weren’t really that different to the prices in London, you just need to be able to do your conversions properly and stay away from the places that were more expensive than what we would normally pay. We found the info centre where we booked our Golden Circle tour for the next morning, now that was a little expensive but we chose the one that gave us the most value for money and there was really not much cheaper.

We started the day on a tour bus at 8 am and still pitch black. Luckily it took us about 2.5 hours to get to the first destination so we had a little time for the sun to come up so we could see the Geyser, that was cool to see we managed to see it blow a few times before freezing our fingers off. 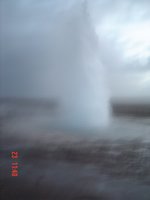 Back on the bus to defrost and on to Gullfoss waterfall, wow I have seen some really cool waterfalls and this one was up there with the best of them. We walked right down to the water itself so close that I got the spray of the waterfall on my lens. 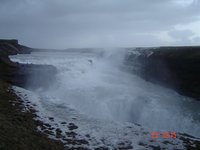 Once we finished at Gullfoss we headed on to see Stalkolt Church, which is the ancient seat of the Icelandic bishops in the south and where the first translations of the Old Testament was printed. This was a quaint little town, where they have the only remaining medieval ruins. It is also said that the founder of Reykjavik while sailing into Iceland threw two huge pylons in to the water and said that wherever they come ashore is where he would settle. While he was searching for the pylons he settled on this site, once the pylons were found he then moved to where they were and named the new town Reykjavik, which is now the Capital of Iceland. 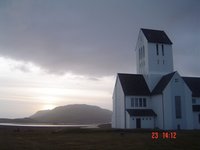 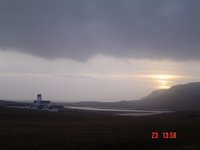 After that we headed off to see the Caldeira Kerio, which is a very colourful extinct volcanic crater that is filled with water. Another to add to the many beautiful things I have managed to see so far. 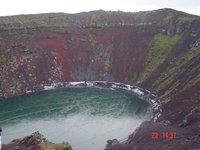 Then we travelled around Lake Pingvillavatn where they have several hydro power stations and on to the Pingvillir National Park, where we were taken to see Alpingi which is the Icelandic Parliament in Pingvillir, which was founded in 930 making Alpingi the oldest know functioning parliament in the world and the most interesting thing about it is that it is held on wooden benches in an amphitheatre at the bottom of the American tectonic plate. Pingvillir National park has been created from the tectonic plates, American and European drifting apart over the years. The fissures and faults were quiet easy to see with my naked eye but unfortunately a bit harder to capture with the camera. We walked up to see Alpingi and took the opportunity to take some photos over the National park. After there we headed back to Reykjavik and had an early night as it was dark once again. 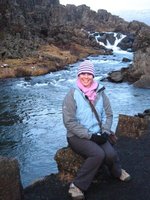 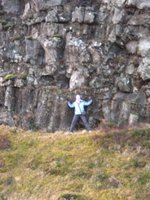 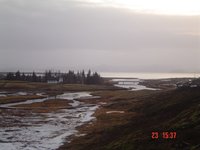 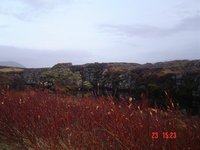 Christmas Eve was a quiet one in as in Iceland it was a public holiday so everything was closed so no tours running. So we wandered around the city for a while, we had Christmas dinner buffet booked at one of the local hotels, which was quite nice but very filling. Christmas day Santa brought us a white Christmas it had snowed over night and it was fantastic to finally get some snow on Christmas. We didn’t really do a lot for those couple of days besides eating and relaxing but overall it was a lovely Christmas. 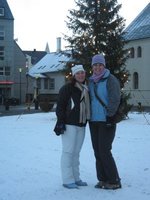 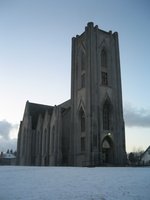 Boxing day came round and we managed to get out to the Blue Lagoon, Wow that place is fantastic especially being that is was made by accident. The neighbouring geothermic plant thought if they dumped the used water that it would be absorbed back into the ground but the water actually had a chemical reaction with the volcanic rocks in the area and created the Blue lagoon as it is today. Well nothing like soaking in the mineral enriched hot geothermic water but first you need to get from the change room to the water itself trying not to knock over anyone on the way out trying to escape frostbite. Cat and I floated out in the lagoon for a few hours using the mineral slug left in the buckets on the side of the lagoon to exfoliate our skin, they pump boiling hot water was awesome but so was the waterfall, I could stay under there for hours it gave the best natural massage I have ever had. Well the fun at the blue lagoon had to end at some stage as both Cat and I were soon turning into prunes and that isn’t so attractive. We headed back tot he Guesthouse and got some dinner and called it a night as we had an early start in the morning to get out the airport. So overall I would have loved to see more but would advise if you want o see it all don’t go when they have public holidays as nothing gets done. 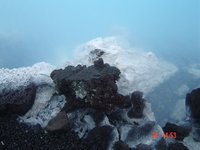 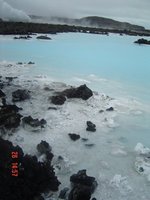