All righty then, Next stop was New York. I didn't get in until late on thursday night so I decided to head to bed and try and have an early start. Next morning I woke to a lovely view, we had a suite at the Waldorf Astoria on Park Ave, Manhatten and the view from the lounge was fantastic. You could see all the way down Park Ave towards Harlem, really quiet special if I do say so myself. After admiring the view I decided to step out for a while and have a wander around. Boy it was a bit chilly that day. 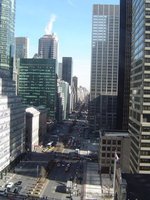 I went up to 5th Ave and saw the St Patrick's Cathedral, didn't go in at that point as it didn't seem to be open, so I kept wandering down towards Central Park where I walk past Truimpe Tower, very lavish looking building. Kept going and ended up walking around the south eastern end of Central park for a couple of hours. It is truely amazing to see that they have left such a large park area in the middle of the jungle of 60 story plus building, it is really nice to see the contrast though. After I spent some time there I decided to head for Times Square and found the Rockefeller center on they way (Missed the ice skating rink the first time round) and on to Times Square. I had only ever seen footage of it once or twice so it took me a little bit to recognise it. 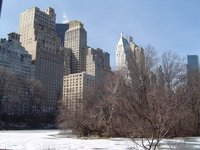 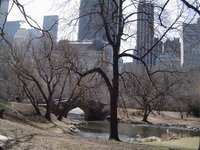 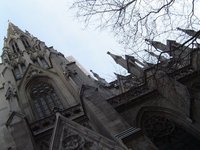 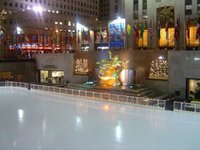 Well it was now time for lunch so we headed to the Grand Central Station and had a fantastic meal at te Michael Jordan Steakhouse, which looks out over the main area of the station. After the long lunch we ended up hiring a limo for about 6 hours and the driver drove us around Manhatten. I got a little bit spoiled, well a lot actually. We went to the Rockefeller Center and up to the observatory to see the nightscape. We didn't get to the Empire state building as the lines were too long but I did manage to see it from the Rockefeller center as well as the ice skating rink this time. Then on to take a photo of the David Lederman late night show sign outside the studios. Past Radio city and into Times Square with all its neon lights flashing, now that really looks fab. We stopped to have a drink in the lobby lounge of M in Times Square (some hotel). We had dinner reservations at 11.30pm and of course I was starting to feel a little peckish so we headed to another restaurant/bar off columbas cirlce for another drink and snacks. Well I then had to go home and get dressed for dinner but by that time I was so tired and a little tipsy that I ended up curling up in bed and missing dinner, oh well there is always next time. 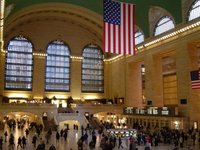 The next morning I had a lazy start and watched a movie waiting for Scott to wake up. I then headed out for breakfast, bought some postcards and looked inside St Patrick's Cathedral while Scott finished off some business stuff. We then headed off to catch te Staton Island Ferry, which was really cool. I got to see Manhatten from the water which is really beautiful. It is really amazing that they have so many high rise buildings on such a small island. We went past Ellis Island and the statue of liberty. I would love to see both of them closer next time I come back. I got a couple of photos but just my luck my camera batteries ran out as we were going past the statue of liberty and by the time I got them changed we were pulling away from her. On to Staten Island we go, it looks nice from the water but the area we drove through in the car seemed a little rough, so we kept going on to the airport and over the longest bridge in New york on the way. 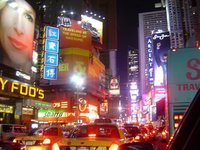 Thats the end of this chapter...