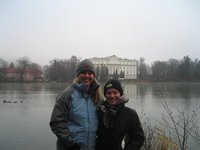 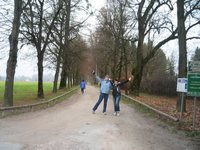 Well we have just been to Salzburg, the birth place of Mozart and “The Sound of Music”. Salzburg is yet another of the absolutely beautiful cities I have seen lately. It is busy but peaceful at the same time. We arrived Friday afternoon and managed to read enough German to get ourselves to the hostel. We had an early night so we had a fresh start in the morning. Well the morning came and no fresh start to be had. Hostel was fantastic but we had some very noisy Asian ladies in our dorm, one was wearing high heal thongs while we were sleeping so we weren’t really impressed them at all. After breaky we headed off on the original sound of music tour, we saw quiet a few places of course all of them being sets used in the movie or places of interest about he real Trap family who actually lived in Salzburg. We had a ball singing along to The Sound of Music Soundtrack on the bus while driving around the beautiful country side around Salzburg, the mountains, rolling hills and lakes are just jaw dropping. We were going to do another tour the next day but we found out that we could do it all on the same day and get a decent discount so we ended up doing the Bavarian Alps and Salt mine tour as well. The Bavarian Alps are fantastic, we drove up the road to the Eagles Nest/ Hitler’s Retreat but we couldn’t get all the way up to there as it is only accessable during summer months, I didn’t managed to get any decent photos as the bus keep driving, it would have been really nice if they had stopped for a moment so we could take some photos of the alps as it was truly amazing. Anyway on we went down to the Salt mines in Bershtesgaden, little did we know until we got to the Salt mine that we had actually crossed the border and were in Germany, wow another weekend were I get to see 2 countries at once. Anyway back to the salt mines the tour took us an hour and half to wander and slide our way through, it was interesting enough but I wouldn’t really do it again. After we managed to get out of the mine due to problems with the train there was a bit of a delay the bus took us into Bershesgaden for a little while to have coffee, Cat and I decided to have a look around but everything was closing so really didn’t get to see much there. After the bus dropped us back both Cat and I were shattered so we just had some dinner and a drink and passed out. Mind you I should say we were both very tired prior to getting to Salzburg as it had been a very busy week, I had been out to a couple of theatre productions the nights prior to leaving for Salzburg, thus being knackered on Saturday night. 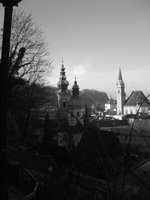 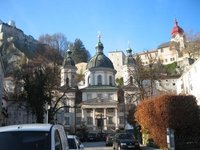 Sunday we decided to wander around Salzburg for a bit and had a look around, we saw the Building where Mozart was born and grew up, then found some really nice Christmas markets in Old Salzburg (Salzburg is known for its fantastic Christmas markets) we had a quick look around and then made our way up to the Fortress on the top of the hill/mountain in Salzburg. This is really the most amazing fortress I have seen so far, it’s very impressive and really quiet large. We caught the funicular (train that goes up the mountain instead of a chairlift) up the mountain and decided to walk down, so after looking around we started to wander down, as it had been quiet cold over night there was still ice crystals on the shrubs so I thought I would be silly and touch it as I hadn’t seen snow in quiet a while, silly me didn’t think of the ice on the ground and fell flat on my back hitting my head on the cement in the process, so if you are here in winter and decide to walk down, TAKE CARE, as it really did hurt. While looking for a chemist with pain killers we wandered around well I hobbled around and saw the Nonnberg Abbey where they shot the movie. You can’t describe Salzburg it was just picturesque. After walking around all day we decided to head back to the hostel to thaw out before heading out for a traditional Austrian dinner and schnapps. While we were at dinner we ran into some interesting characters who, then turned up at our hostel later that night. They were having some Christmas celebrations and there were students dressed up as demons and saints wandering the streets of Salzburg. Not sure of the reasoning but it was interesting to see and that was the end of our trip to Salzburg. Overall this was not an overly busy trip, it was definitely at an easier pace than some of the others so far but still very enjoyable. 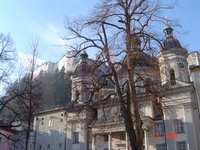 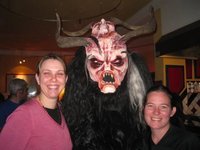