Well we headed OS again, this time to Prague, the city of 100 spires. We started without hiccup this time. All smooth sailing or flying as it was, well except for some turbulence leaving London, but we survived that. We flew into Prague on Friday night, once working out the metro and bus system we found our way to the hostel we were staying at. It was quiet cute, we were lucky enough to get put in a 4 bed dorm instead of the 6 bed dorm we paid for and then managed to have it all to ourselves. After settling in we stepped out for some dinner and then headed back for an early night, Cathryn doing her usual grabbed some brochures and while reading noticed a great walking tour, so we decided to do that the next day.

We got up early and wandered in to the meeting point for the walking tour. The Guided tour ended up being over 7 hours long, boy that was a lot of walking, but we did get to see almost all of the major attractions and went through the history of them all. Mind you I think I have an information overload. I will endeavour to remember what everything was as I go through. 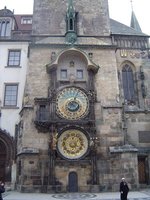 We started the tour at 9.30am under the Astronomical clock in the old town square. The Astronomical clock is on the old town hall tower, everyone stops to watch it on the hour as the 12 apostles are lead out by Christ, while a skeleton of death tolls the bell to a defiant statues of turk who shake their heads saying its not time to die and that they want 1 more hour. 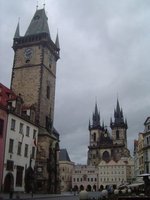 When then headed across the square to the Church of Our Lady before Tyn. This is a fabulous church to see both during the day and at night. It took over 600 years to build as they ran out of money when they got to the roof and every time they had enough logs to finish it off someone would use them to hang people and then they couldn’t be used in sacred grounds and had to wait again for more logs to be cut and it went on for quite some time. Oh well it is finished now and looks beautiful. 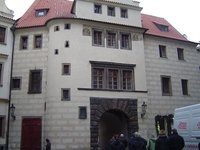 Then through the Tyn fortress which is just behind the Church. Back in the day Prague was on one of the major stock trading routes in Europe, this was where all the traders used to pay their tax on the goods and stored their goods safely while they were in Prague. 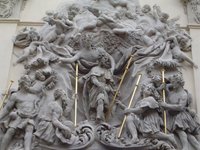 The next stop was St James Cathedral, which has the largest pipe organ in Prague, they told us an interesting story about a thief that tried to rob this church. He tried to steal the golden chalice, one of the saint’s watching over the church did not approve of the thief taking the chalice so she wouldn’t let him remove his hand with or without the chalice. The Priests heard the commotion and also tried to help him remove is hand. With no success they had to get out an axe and chop off his hand, he got punished for his crime and the mummified hand still hangs in the church today. So I suppose no one will be trying to steal from that church again. 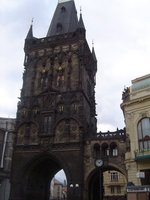 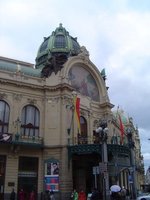 On we went to the Powder Tower which is the last remaining section of the old City wall; we saw a few other places and then headed back to the Astronomical clock to pick up people joining us at 10.30. We then all walked down to the river Vltava, where we cruised along the river for an hour; this is where I really went in to information overload. Way too much to see and listen too at the same time. 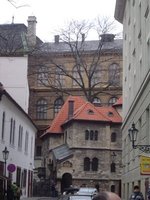 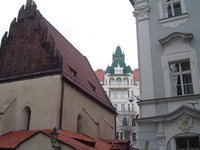 After the cruise we headed to the Jewish Ghetto, where we saw the Jewish Synagogue and the old Jewish cemetery which was really quiet interesting. As they were unable to expand the cemetery and you can’t disturb the dead they decided to build a wall, remove the tomb stones and fill over the top of the old graves. They poured about 5 feet worth of clay in and started again they kept doing this and so far have 16 layers of Jewish bodies in the cemetery with all the tomb stones on the top.

Well by this time with all our walking we were absolutely starving so lucky the next stop was at our restaurant, where we had our traditional 3 course meal, nothing special but was still nice enough. We stopped there for about an hour and then went on to see the Charles bridge, stopping here for a quick look we then headed over the bridge towards the Prague castle. 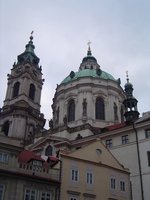 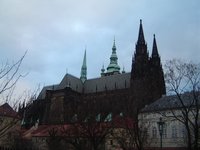 We had to stop outside the Catholic St Nicholas Church while waiting for the old style tram to take us up to the Castle, wow that place is huge. We stopped first outside the offices of the Czech president; only a portion of the castle is open to the public as it is still used as parliamentary offices. We managed to see the changing of the guards, they have 2 types of changing of the guard parades one is a small one every hour to change the guards in the booths at the gates the other is a big changing of the guards where they do the big hoo haa and change, a new troop of guards come in to relieve all the guards on duty. We saw the small one, which was interesting to see but nothing special. 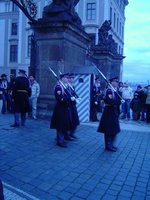 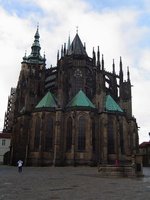 We then went on to see St Vitus’s cathedral, which was closed but the outside was very impressive. They have quiet a few churches within the castle walls and this is the largest of them and it is also the largest church in Prague. We then headed on to a little lane, golden lane, where the soldiers used to live. There was a set of stairs running up to the top of the castle walls so that if they were sleeping and got attacked they could run out of their houses and up to defend the castle. The cottages were very cute and had tiny little doors. Well that concluded our walking tour. We tried to take some photos of the cityscape but as it was getting dark and I have the shakes it was a bit hard to get a good shot so we decided to come back up the next day to get some shots in daylight. 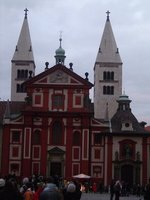 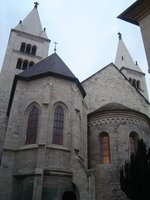 As part of the guided walking tour we also got a ticket to a ghost trail tour which we did that night but had a few hours to kill before is started so we wandered around found some dinner and then headed out to hear about all the ghouls and ghosts that haunt the dark alleys of Prague. This was only a short tour and interesting but a little far fetched at times. Due to the day being so long there was no partying for us, we headed back to call it a night. 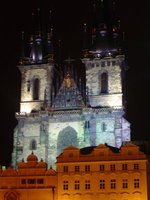 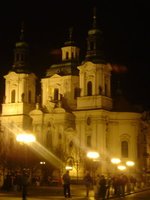 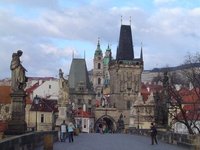 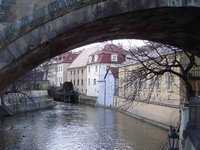 Yes up early again, much to my disgust as I really just wanted to sleep in for a bit but we headed back over the Charles Bridge, while no body was out and about. We then walked past the St Nicholas Cathedral up the Royal route, which is the path that the kings used to walk, there are little silver plates on the sidewalks marking where they used to got with “Silver Line” We followed the silver Line up to the castle in the rain to take more photos. Thankfully the rain stopped and we were able to take some photos of the city. We managed to see the full changing of the guards and then went on to look inside St Vitus’s Cathedral.

Back down to the Astronomical clock where we went up the tower and took some photos over the city. This view was better than from the Castle, the only downfall is that you can’t see the river from this view point. 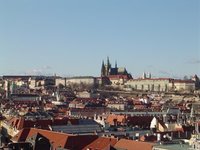 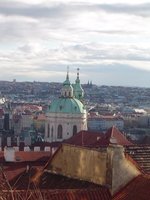 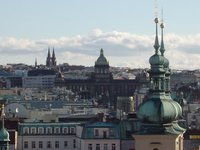 We noticed a funny little thing on our travels; quiet a few of the houses have different carvings, statues or paintings on the front of their houses. We were told that this was due to the fact that in the past many could not read and it was an easy way of distinguishing which house was theirs for visitors coming to town. 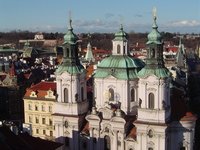 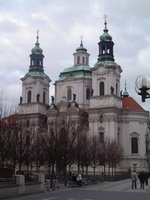 We then went on to look at the St Nicholas church, not catholic, and on to the Bethlehem Church, by this time I had seen enough churches for the weekend so we headed to see the local markets before heading to do a little shopping as things were so cheap in Prague. Made our way back to the airport and just got there in time as we slightly under estimated how long we needed to get there and be there before flying.