After Edfu we then headed to Luxor, settled into the hotel very quickly and headed straight out on a guided tour of the east bank of Luxor, which took us through the Karnak temples and the Luxor temple. Both of the temples were absolutely fantastic it was really nice to see that some of the statues were still in one piece. The tour finished around 6.30 so we headed out for dinner in the area of our hotel. We were pleasantly surprised to find a really nice English restaurant where we had a fantastic dinner. 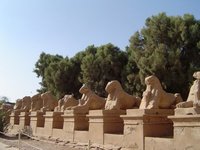 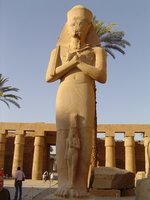 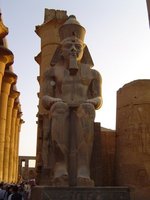 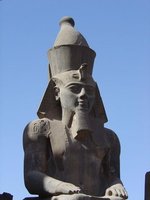 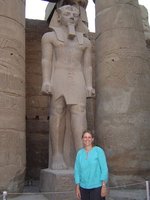 The next day we had a private car and our own guide to show us around the west bank of Luxor. Our guide was really quiet good he had studied Egyptology at university and knew all the little details. We started by seeing the Colossi of Memnon, which were 2 large statues and then headed to the Valley of the Kings and while we were there we went into 4 tombs and all were very different. I cant remember the names of them all but we went into 2 of the Ramses tombs and Tutenkhamun’s tomb, which was really nice to see especially after having seen all of his treasures in the Cairo museum. His tomb is really small and consists of a room where his sarcophagus is complete with his mummy in its casket and a treasure room. 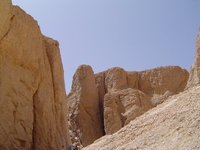 After the Valley of the Kings we stopped at the Temple of Hatshepsut, we were told that it was worth paying for entry as the inside was totally reconstructed and not original so we just took photos from the outside. We both wished we were able to get closer to the outside the temple as we were told it was impressive by other travellers. It was then on to the valley of the Queens, which was also the burial grounds for princes and princess’s. We went into 2 tombs of princes and one of a queen but like the valley of the kings and actually most of the west bank we were unable to take photos inside the tombs. 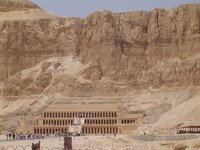 We then went to see some tombs of the nobles, stopped for a bite to eat then on to see Medinet Habu, which was very similar to Philae, Edfu and Kom Ombo. So that took most of the day, we headed back to the same restaurant for dinner, as it was so good the night before. Then packed for an early departure in the morning. 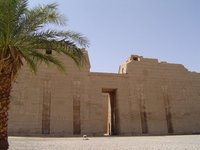 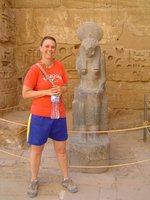 Posted by krissy 08:12 Archived in Egypt