This started straight after our trip to the islands of Aswan. We dropped off a couple of people and picked up a few more, we turned out to be a very international group, 3 Aussies, 2 Slovenians, 2 Malaysian and of course the 3 Egyptians that were crewing our felucca for the journey. We started slowly tacking our way up the Nile, stopping only for toilet breaks. We stopped at a nice little sandy spot for the night which was out of the current so we didn’t get rocked away by the waves of the cruise boats continuously going past us. After dinner the Slovenian guys pulled out some schnapps and we played cheat (card game) by candlelight. 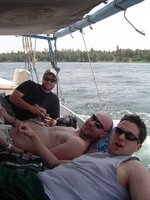 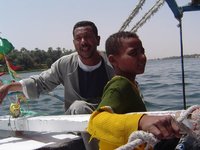 Needless to say we were up with the sun the next day as the felucca is a wooden boat with boards over the hull to make a flat area covered with a thin mattress that you sleep on and a shade sail to protect you from the sun. Nothing flash but quiet enjoyable for a couple of days. We just relaxed again, stopping for lunch and a greatly welcomed swim to cool off. We then stopped near the local camel market and one of the Egyptian guys went and bought us some camel meat for dinner, which turned out to be really nice. They stewed it for 3 hours and it was really tasty. We also had chicken for those that didn’t want to have the Camel and that was also one of the best style chicken I have had in the Middle East. We ended up anchoring the felucca alongside what seemed to be a rice field with a few other feluccas and all ha a bit of a sing-a-long. We ended up having a bit of a problem with the mosquitos due tot eh rice field and all got eaten alive. 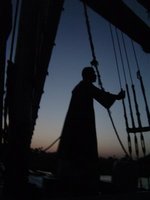 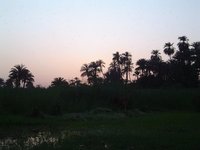 We were up early the next morning to sail an hour to Kom Ombo temple. We got there before the crowds of people and took the opportunity to use the toilets available and met some rather disgusting tourist police that made both Cat and I feel really uncomfortable.
We wandered around Kom Ombo for about 30 mins and then had to waste 45 mins before the other people on the convoy were ready to leave for our next destination. 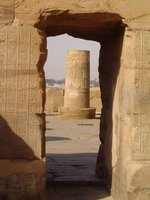 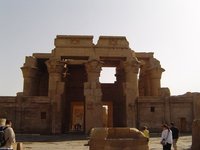 On to Edfu temple next, we had about an hour to wander around here, Edfu is a temple for Horus and it had some lovely statues of him. Both Kom Ombo and Edfu are impressive Egyptian temples, which we were able to take photos of and very happy about. There is nothing like seeing an amazing historical site and not being able to take photos to remember it by. 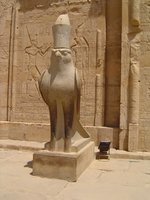 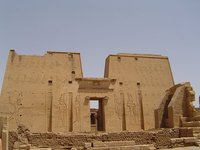 Posted by krissy 08:11 Archived in Egypt