We spent the whole day travelling from the Libyan border. On the way from the bus station to the hotel Cat and I were delighted to see the Alexandria had KFC and McDonalds, the first real western food we had seen in 5 weeks. Just what we needed to break the monotony of the Schawarmer and Shish kebabs we had been eating since we left Dahab.

Up reasonable early to see Alexandria. We went out to the Kom Al Shuqqafa Catacombs, which were interesting but unfortunately one fo the many sites we were not able to take photos of. Then on to see Pompey's Pillar, which I am told has nothing to do with him at all and just called that to attract some tourist. We then managed to catch another taxi with a driver that couldn't speak English or read Arabic; we drove around in circles for a while but eventually got to the Batboy Fortress. We tried to find the Greco-Roman museum but it was closed so we went on to see Kom al Kikka, the roman Odeon. We then had just enough time to collect our bags from the hotel and catch the train to Cairo. 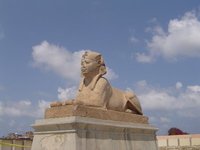 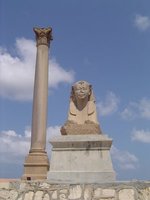 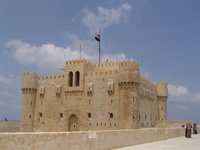 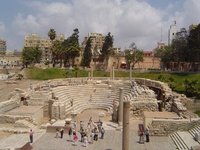 Posted by krissy 05:53 Archived in Egypt