The Spanish girls joined us for our trip to Wadi Rum, arrived in Wadi Rum about 10am and rattled around the desert in a rickety old 4WD. Erica and Steph only joined us for our first day and night in Wadi Rum, so both Cat and Erica where little monkeys and climbed anything and everything they could. We saw many things in Wadi Rum, so I will just mention a few of them. We saw the Seven sisters from the visitors centre and then started at the red Dune, we managed to climb to the top and the sand was so soft though it took us forever to climb it. 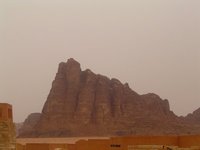 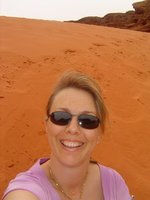 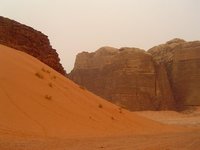 Up to Lawrence's spring (being Lawrence of Arabia) which is a little disappointing as you cant see anything as it is a well up in the mountains that is piped down to watering trough's for the animals to drink from. Then on to see the Nebatean inscriptions on one of the mountain walls. 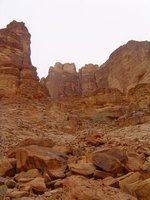 Next Lawrence’s house, this was ruins of a small brick house that was more like a pile of rubble, that rest against a big rock but it had a fantastic view and the girls found it for climbing. 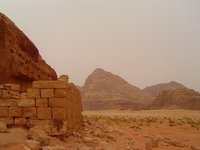 Next was Um Fruth Arch or Bridge and Khazali Canyon and then off to the campsite where we had Bedouin tea and relaxed while dinner was prepared and cooked. Well dinner would have to have been the best Jordanian food I had had, after dinner we sat around the fire and our guides had a few friends drop in and they played some Bedouin music for us with a loot and some drums and had a little bit of a sing-a-long, which was really nice. As it had been a big day in the desert we decided to have an early night and as it was a lovely night out we opted to have the night out under the stars so we could catch sunrise without having to get out of bed. Unfortunately there were too many clouds to see the stars let alone the sunrise, but it was lovely none the less. 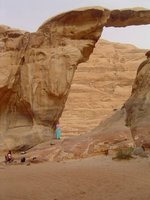 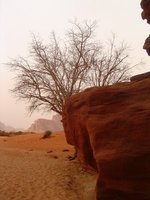 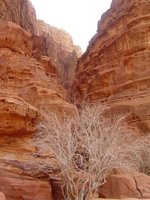 After breakfast we headed out on some more adventures around Wadi Rum, this time with one of the other guides, Abdullah. Abdullah was a lovely guy but unfortunately grew affections for me very quickly, which some times made both Cat and I a little uncomfortable but overall he was very lovely and made the journey a little more interesting. 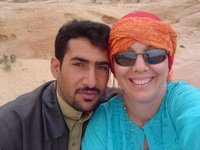 We ended up seeing what they called the Chicken rock, and the Small Bridge, then on to have lunch at Burrah Canyon. 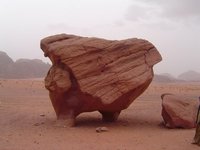 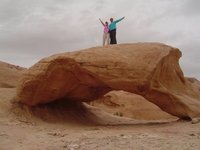 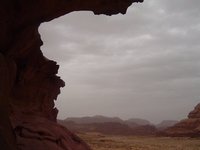 Burrah Canyon Was fantastic, lunch of course was traditional Bedouin food. Canned tuna on their flat bread, which is like our pita bread, cucumber, tomato, followed by Bedouin tea. Unfortunately a sand storm blew up while we were having lunch, which made for and interesting trip back to the campsite especially stopping every 500 meters for a while to collect firewood. Oh well I suppose it completes the desert experience. 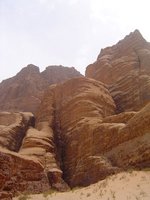 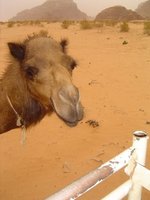 Posted by krissy 09:48 Archived in Jordan