We bumped into some lovely Americans on the bus to Neweiba to catch the ferry to Aqaba and then some Spanish ladies in the fantastically clean departure lounge at Neweiba, now that was a joke. It is absolutely disgusting. Anyway we were all traveling in the same direction so we got a couple of taxis and off we went. As it was getting dark quiet quickly and Cat and I wanted to see the Aqaba Fortress/castle our taxi driver took us to take some photos before heading to Petra. After arriving at Wadi Musa, which is the town area that is right near Petra that we needed to stay at, we organized our room, got some dinner and called it a night. 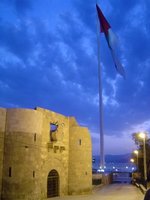 Up early for our first day in Petra. We organized a guide through the hotel, they dropped us off at the main gate and off we went. I loved our time looking through Petra. Walking down the Sig, which looks like there was an earthquake and the earth has opened up and made the pathway that meanders down to the Treasury, which is the facade that was used in the "Indiana Jones and the Last Crusade" movie. 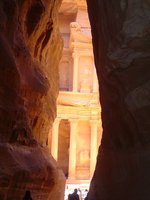 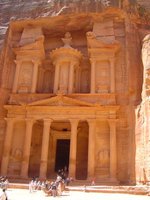 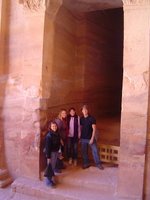 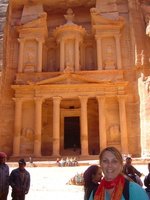 After that we wandered further through to see the various types of tombs and excavations. 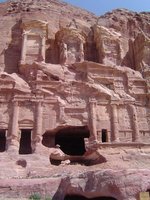 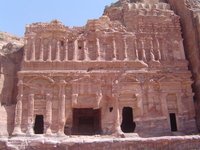 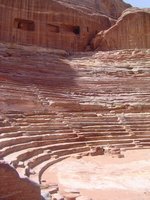 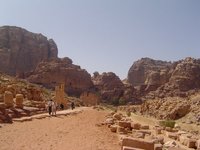 We stopped for lunch before catching a donkey/mule up the mountain to the monastery, which was as awesome as the Treasury. They both have totally different feels about them. The Treasury was very elaborately carved and the monastery is very simple. We were told that the Treasury was most likely designed to be used for christenings or baptisms of some sort and that the monastery was used as a last preparation before burial. 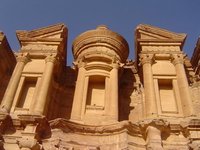 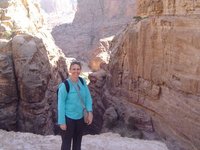 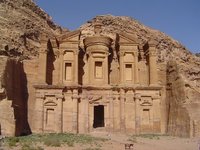 Ok, now that we have seen that and all the marvelous views we now had to walk the 800 steps back down the mountain and of course I ended up leaving my camera at the top, luckily I figured that out before I got to the bottom. I just had to walk up about 150 steps and back down them to meet up with the others that were patiently waiting for me. When we finally got to the bottom I decided to get a donkey ride to the Treasury. We headed back to the hotel for a traditional Jordanian dinner cooked by the hotel manager’s mother, which was lovely and really convenient for an early night after a big day. 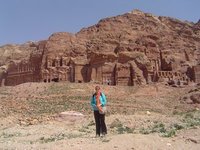 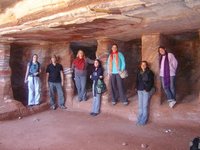 Next day, back down to Petra, this time without a guide and with the Spanish girls we met on the ferry Erica and Steph. We wandered down a route that was advised by our guide the previous day. We walked down this track which was basically a dry river bed, had to walk down rock walls and all but totally had fun getting back to nature and loved the welcomed peace from the continuous cries for donkey rides from the Bedouin men and boys. 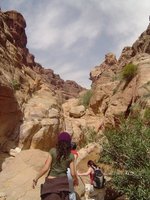 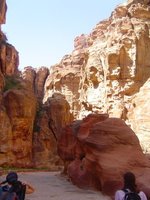 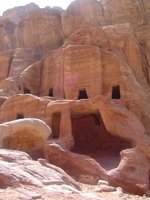 Once getting back to the main section of Petra again we had a quick lunch and walked up to High Sacrifice, another 500 steps or so. We got to the top and saw some fantastic views over Petra and the obelisks, then decided to take the alternative way down the mountain and saw some more fantastic tombs and monuments and got shown by some Bedouin ladies a short cut back to the main area of Petra, which saved us some time and energy. Back to the hotel to work out our trip to Wadi Rum before heading out to see Petra by night. 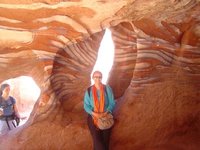 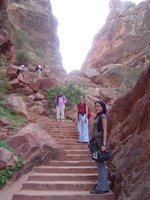 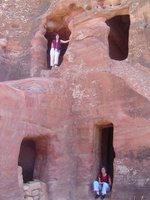 Petra by night was lovely, a beautiful memory as it was too hard to take a photo, but a little disappointing as they had all the candles lining the Sig (pathway) down to the Treasury and in front of it but unfortunately none on the steps or inside which would have been really cool, you really didn't get to see much of the Treasury at night. They had some lovely Bedouin music being played but as we were not able to see the treasury we headed back early and caught up with our guide Ali from the first day for a drink before he dropped us back to our hotel to pack for Wadi Rum.

Posted by krissy 08:47 Archived in Jordan

You can book Petra By Night at Jordan Tours & Travel in Petra, close to the main entrance. Petra by Night is only available 3 nights a week. Another fantastic experience that I had in Petra it was a night at Petra kitchen...You cook your jordanian food with local women and you bring home the apron and recepies! Lots of fun!